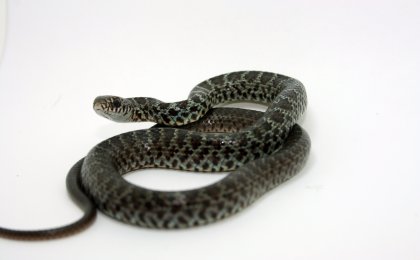 Look at this snake. It is a survivor. A friend of mine had a LOT of snakes in her basement one year. We put down sticky traps, and once a day I would check them, and use vegetable oil to free any snakes caught on the traps, and release them outside away from the house. This snake was found on a trap in December. This time though, my friend didn't want to bug me to come out because she believed the snake was dead, and her neighbor volunteered to take it outside and throw it in the trash can.

I decided to stop out the next day to grab it and give to a museum or something for tissue. The snake wasn't buried under any garbage or anything, it was just sitting on the trap on the bottom of the can. I took the snake and trap home, and dumped some vegetable oil on it so I could work the snake loose. After a minute or two, I was surprised to see the snake wiggle it's head from side to side. Again... this snake was found in December, and was left outside, overnight, in temperatures that were well below freezing. After getting it off the trap, I cleaned it up, and took some photos of it, just for practice.

Because it was December, I couldn't release the snake, and it was given to a nature center in Johnson County.

A New Hope... Err.. Turtle. Some New Life In Old Cactus There Is Hope! The Lone Survivor? It's Always A Good Time To Go Herping... Even If It's About To Rain! Signs Of Snakes Nailed It! At Least I Had My Cell Phone... Merping With The Orianne Society The Little Agate That Couldn't The Tiger Salamanders Are Back! Tarantulas Are Marching North Smooth Softshells In The Wapsipinicon River Twelve Consecutive Months Of Herping In Iowa A First For Me, But Not A Lifer When The Day Is Gray And Ordinary...