At Least I Had My Cell Phone... 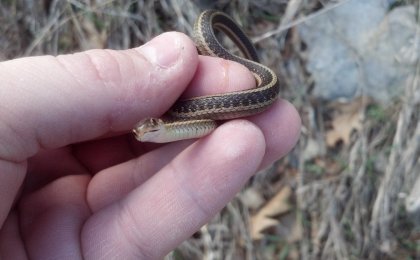 There is a spot in Benton County, Iowa, that myself and my friend Jim Scharosch both flip rocks at from time to time. For a while, we didn't know that the other worked the spot. All I would ever find there was Common Garter Snakes (Thamnophis sirtalis), but the spot was near a rock hunting location, so I stopped by when in the area to see if anything new popped up. After Jim and I realized we both worked the spot, he told me that he found Milk Snakes (Lampropeltis triangulum) and Racers (Coluber constrictor) at the spot along with the Common Garter Snakes. I continued to stop at the spot and check the rocks, and I continued only finding Common Garter Snakes. It was getting a bit annoying, and it became worse last year when Jim stopped at the site and found a Western Ribbon Snake (Thamnophis proximus). Not only have I never seen one in Iowa (I have in other states), but it was also the first time they had been recorded in Benton County, Iowa. I stopped by the site a few times that Spring, Summer, and into the Fall, and only turned up Common Garter Snakes. 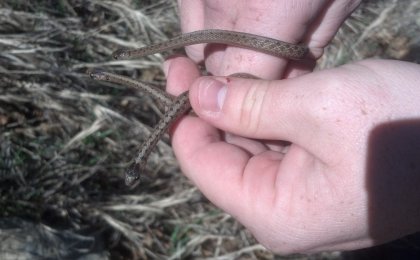 Today, I was checking out a few spots with my brother, and we ended up in the area of the cursed location. Jim had found a second Western Ribbon Snake at the spot last week, so I decided to stop by and see if I could flip one. My brother and I started finding snakes right away, but just like every other time I had been here, we were just finding Garter Snakes. When ever my brother found one, I made sure to double check to make sure it wasn't a Ribbon Snake. I told my brother that we were looking for a snake that was similar to the Common Garter Snakes, but had a paler face, longer body, and an orange stripe on it's back. We continued to flip, and continued to find Garter Snakes. Finally, my brother flipped something different... Brown Snakes (Storeria dekayi). It wasn't what I was hoping for, but at least it wasn't a Garter Snake. We at least found something new at the site, even if I have seen thousands of Brown Snakes in the past. 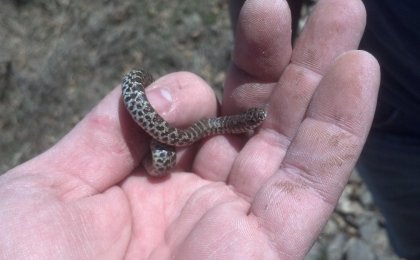 We pressed on, determined to find a Ribbon Snake. At this point, I wasn't even telling my brother when I found a Garter Snake. I would just move them out of the way, set the rock back down, and let them go back under it. It really didn't seem worth making much of a fuss about at this point. My brother and I were staying a decent distance apart from each other for most of the time, but we found ourselves working rocks closer and closer to each other. Eventually we were only a few feet apart working a small rocky area, when my brother lifted a small snake out from under a rock. I was able to tell exactly what it was, even before he yelled out, "Ribbon Snake!" I was filled with a mix of emotions. On the one hand, I finally got to see a Ribbon Snake in Iowa. On the other, it was my stupid, no good, ugly faced brother who found it. What a stupid jerk face he was to find the snake that I wanted to find. Did I ever mention that my brother smells funny? Anyways... we found a Ribbon Snake, and I was happy about it.

I sat there admiring the animal as I remembered that I did not have a real camera on me. Figures. I always tell people that you find the best things when someone has to cancel on the trip, or when someone forgets their camera. It would seem that today, I had good luck, and bad luck. Fortunately for me, the cameras in cell phones are really improving lately, so I was going to try to take some pictures with my phone, and see how they came out. As we talked about where I wanted to take pictures of the snake, I heard a noise. It sounded like wind moving the leaves, but it wasn't. Wind moving leaves has a certain sound to it, and a snake moving through the leaves has a different sound, that once you are accustomed to, is VERY distinct. I looked back over my shoulder, and there was another Ribbon Snake coming out of the leaves right by where my brother had found the first! Now, not only have I seen a Ribbon Snake in Iowa, but I found my own!

Once again, I started to look for a place to photograph the snakes. My brother decided to keep flipping rocks, so he started to walk away. He only managed to take a few steps before he yelled my name, and grabbed another Ribbon Snake. It too, was crawling out from under the leaves. This third snake was much larger than the two before it, and was much calmer, so I sat down with it to finally take a few pictures. After I got what I think are the best shots my phone would take, we ended the trip on a high note, and headed home with the curse lifted. 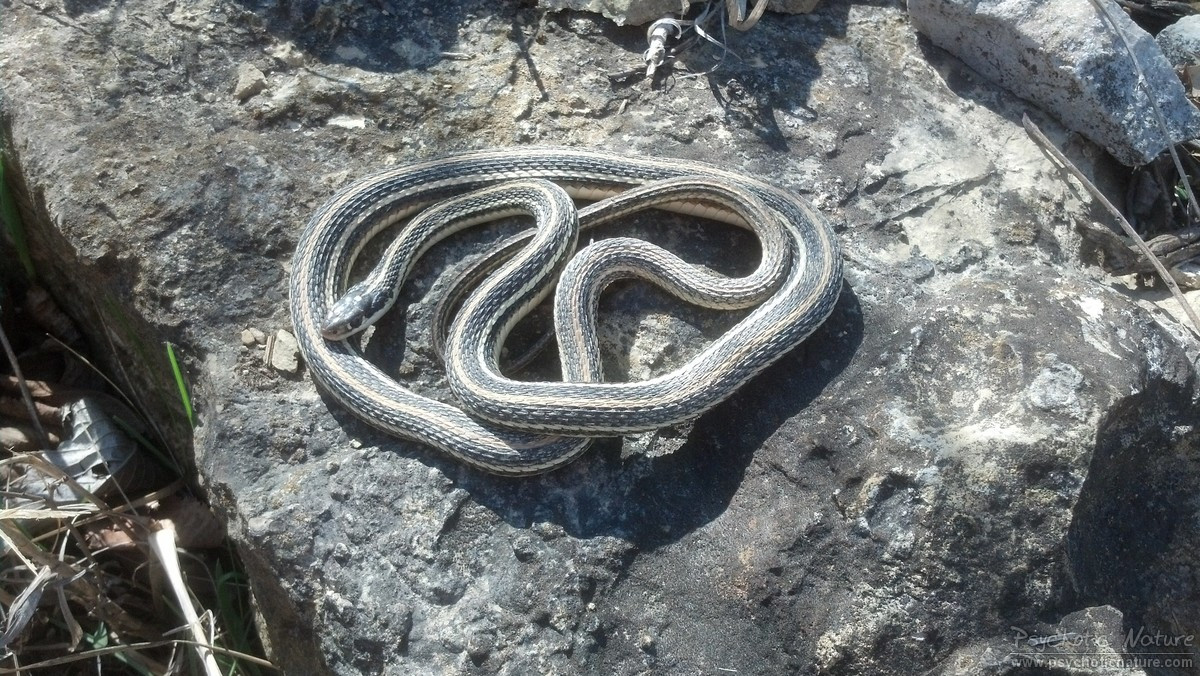 A New Hope... Err.. Turtle. Some New Life In Old Cactus There Is Hope! The Lone Survivor? It's Always A Good Time To Go Herping... Even If It's About To Rain! Signs Of Snakes Nailed It! Merping With The Orianne Society The Little Agate That Couldn't The Tiger Salamanders Are Back! Tarantulas Are Marching North Smooth Softshells In The Wapsipinicon River Twelve Consecutive Months Of Herping In Iowa A First For Me, But Not A Lifer When The Day Is Gray And Ordinary... Snakes Are Survivors