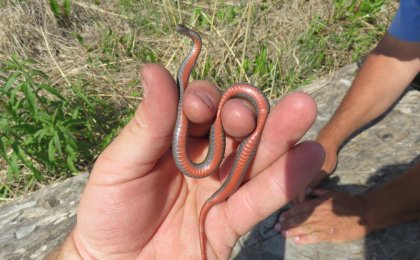 A few years back, I don't recall exactly how many, a co-worker of Jim Scharosch ran over a snake in his yard, and brought it to Jim at work to ask what it was. If I recall the story from Jim correctly, he initially said that it was a Brown Snake, but when his co-worker turned away, the bright red belly of the snake turned to Jim and he knew it was actually a Redbelly Snake. They were not known to occur in Linn County, so we got a bit excited about it. 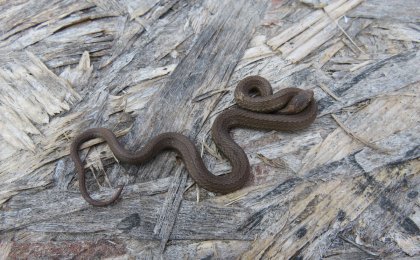 Myself, Jim, and Matt Ricklefs searched around the area it was found a couple times, and found plenty of Brown Snakes, but not Redbelly Snakes. Soon after, Linn County Conservation acquired some new property in the same corridor of habitat, so I was able to put some boards out. The boards have turned up a lot of Brown Snakes, and some Garter Snakes, and even a shed of what I think was a Bullsnake, but no Redbelly Snakes. I've had a friend from the Missouri Dept. of Conservation in town the last four days, and we stopped at the spot with boards to look for Mussels, and decided to check the boards since we were passing by them. Lo and behold, we found two Redbelly Snakes. Now they aren't known from a single sighting in Linn County, and hopefully they will continue to appear at the site.

A New Hope... Err.. Turtle. Some New Life In Old Cactus There Is Hope! The Lone Survivor? It's Always A Good Time To Go Herping... Even If It's About To Rain! Signs Of Snakes At Least I Had My Cell Phone... Merping With The Orianne Society The Little Agate That Couldn't The Tiger Salamanders Are Back! Tarantulas Are Marching North Smooth Softshells In The Wapsipinicon River Twelve Consecutive Months Of Herping In Iowa A First For Me, But Not A Lifer When The Day Is Gray And Ordinary... Snakes Are Survivors