Smooth Softshells In The Wapsipinicon River 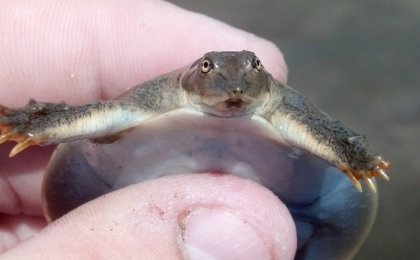 When I was a kid, my family attended a birthday party for a friend of my mom along the Wapsipinicon River. The party was for the adults, so myself and other kids were just running all over the place and exploring the river. I met some other boys who liked reptiles and amphibians as much as myself, and we spent most of the weekend together catching snakes and turtles. It was these same boys who introduced me to Softshell Turtles. They told me about the flat, pancake like, turtles that were in the river, but we couldn't find one. Those boys became my friends, and we spent a lot more time in the river over the years.

Eventually we did catch a Softshell. I thought it was the coolest turtle in the world. I just could not get enough of them. Any time I was near a river, I was looking for Softshells. During one of the trips to the river, my friends decided to run ahead of me, and try to catch all the turtles before I could. Their plan backfired, as I realized an easier way to catch them. As my friends ran ahead, little Softshells would quickly swim off the bank and dig down into the sand. As I came up to the spots, the stirred up dirt and sand at the bottom would be clearing, and I could see the trails left by the turtles leading right to where they were buried. It was simply a matter of reaching down and picking them up from the sand at that point. My friends caught a single Softshell that day, while I caught well over fifty. 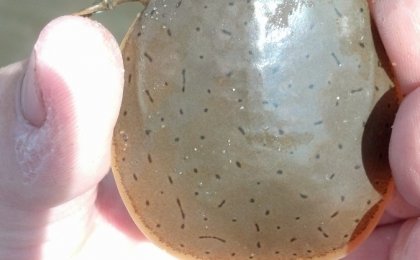 When I started Junior High School, I found the "Peterson Field Guide to the Reptiles and Amphbians of Eastern / Central North America". I checked it out, and never returned it. I was shocked at all the reptile and amphibian species that could be found in the United States, and even more impressed at the number that could be found in Iowa. One thing that jumped out at me, was the fact that Iowa didn't have only one species of Softshell Turtle, it had two! Which species had I been finding? Spiny Softshells (Apalone spinifera) or Smooth Softshells (Apalone mutica)? Had I found both? 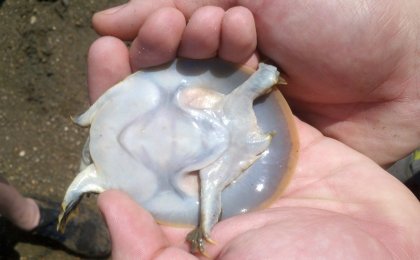 In July of 2012, I made yet another trip to the Wapsipinicon River. My sister, her husband, and my sons were with. They have all come to enjoy finding Softshell Turtles as much as I do, and even if they haven't, they enjoy playing in the river. We hadn't been out very long, when a fan boat came roaring down the river. We all went to the nearest sand bar to get out of it's way. As I walked on to the sand bar, I looked down at the sand, right where the water hits it, and I saw a little head pull down into the sand. I tried to tell my sons to check the spot for a turtle, but they could not hear me over the boat. I saw the sand start to shift, so rather than let the turtle get away, I reached down and grabbed it myself.

With the turtle now in my hand, it took my brain what seemed like hours to process the defining features of this turtle. The top carapace (the top of the shell) had dots and dashes, and not rings. The underside of the carapace was darker in color than the plastron (the bottom half of the shell). Could I have been holding a Smooth Softshell? There was one last thing to check: the nostrils. Spiny Softshells have D-shaped nostrils, with a small notch in them. Smooth Softshells have round nostrils, with no notches. I pulled the turtle up close to my eyes, and sure enough, the nostrils were round. Twenty years after I had started playing in the Wapsipinicon River, I had found a Smooth Softshell Turtle in it's waters.

A New Hope... Err.. Turtle. Some New Life In Old Cactus There Is Hope! The Lone Survivor? It's Always A Good Time To Go Herping... Even If It's About To Rain! Signs Of Snakes Nailed It! At Least I Had My Cell Phone... Merping With The Orianne Society The Little Agate That Couldn't The Tiger Salamanders Are Back! Tarantulas Are Marching North Twelve Consecutive Months Of Herping In Iowa A First For Me, But Not A Lifer When The Day Is Gray And Ordinary... Snakes Are Survivors