On April 24th, Christopher E. Smith and I found a lone Box Turtle on a site where they had not been found in a while, and I was starting to think they may be extirpated. Yesterday, May 4th, I was walking the site and found two more turtles, a male and a female. While I was comparing the sexual characteristics of the two, they began to copulate. Today, while I was out, I found another male, and two more females. If you compare the markings on the image below, you can see that each turtle is a unique individual. There is hope for these turtles still! 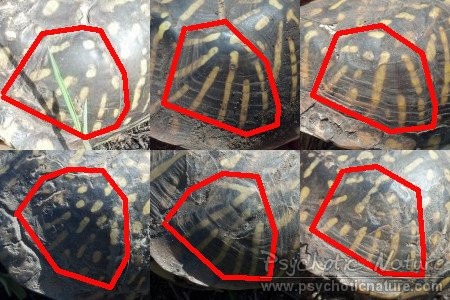 A New Hope... Err.. Turtle. Some New Life In Old Cactus The Lone Survivor? It's Always A Good Time To Go Herping... Even If It's About To Rain! Signs Of Snakes Nailed It! At Least I Had My Cell Phone... Merping With The Orianne Society The Little Agate That Couldn't The Tiger Salamanders Are Back! Tarantulas Are Marching North Smooth Softshells In The Wapsipinicon River Twelve Consecutive Months Of Herping In Iowa A First For Me, But Not A Lifer When The Day Is Gray And Ordinary... Snakes Are Survivors