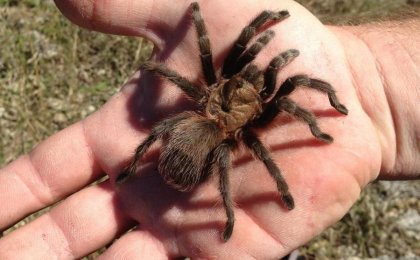 I was doing some herpetology work with a friend in the Missouri Dept. of Conservation. We were flipping rocks in an area, and finding a bunch of Tarantulas. We find them all the time, and didn't think much of it. On the way home, my friend finally yelled "CRAP!", and when I asked him why, he said Tarantulas had never been found north of the Missouri River before.

We checked the Missouri Dept. of Conservation website, which confirmed that the Missouri River was believed to be a barrier. The state entomologist was contacted, and it was confirmed that there was no prior records north of the river. The only problem was, we were more focused on reptiles, and didn't take a picture of a single tarantula, so in October, we headed back to the location to get pictures and molted skins. Among the Tarantulas that we found was the big one sitting in the palm of my hand in the picture in the link. Please keep in mind, that I am a big guy, and have very big hands.

A New Hope... Err.. Turtle. Some New Life In Old Cactus There Is Hope! The Lone Survivor? It's Always A Good Time To Go Herping... Even If It's About To Rain! Signs Of Snakes Nailed It! At Least I Had My Cell Phone... Merping With The Orianne Society The Little Agate That Couldn't The Tiger Salamanders Are Back! Smooth Softshells In The Wapsipinicon River Twelve Consecutive Months Of Herping In Iowa A First For Me, But Not A Lifer When The Day Is Gray And Ordinary... Snakes Are Survivors