The Tiger Salamanders Are Back!

Larval Tiger Salamanders (Ambystoma tigrinum) used to be a common site for me. They could regularly be seen walking around the bottom of the ponds. In 2008, the Cedar River overflowed out of it's banks higher than it had ever done before. The flood waters didn't quite make it to my favorite pond, but the pond itself also flooded, and spilled out into the river. The stream of water pouring out was enough for little fish to swim up, and make their way in to the pond. After the flood waters had receded, the fish were well established in the pond. Smallmouth Bass, Largemouth Bass, Pumpkinseeds, Bluegills, Green Sunfish, and Bullheads were all caught in traps later in the year. In 2009, I saw the largest Bullheads I have ever seen in my life, swimming around the pond. The fish devastated the amphibian populations by eating their eggs and young. 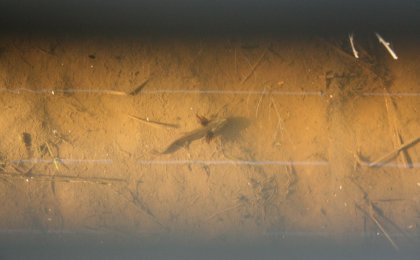 In 2012, we had a hot summer with little rain. I watched the pond daily as the water level dropped little by little. I think I may have been the only person in the country who was happy about the drought. The water kept dropping. Finally, one Saturday, I went out to check the water level, and came across a site that made me smile from ear to ear. All across the pond were the bodies of dead fish, floating at the surface. I was still worried that some of the Bullheads may survive by gulping air, and hiding in the mud. Eventually though, the pond was completely dry, and the earth beneath it was cracked and dry.

All the fish were dead. Now all we needed was a good winter with a lot of snow, and a nice wet spring, and we got exactly that. The snow came and melted and started filling the pond, and the spring rains finished the job. The year was starting out good. Midway through Spring though, I went out to the pond, and what do you think I saw? FISH! There were Green Sunfish making nests at the bottom of the pond. How in the world did they survive the winter? Then it dawned on me... they didn't. I talked with the park staff, and we explored many ideas about how the fish could have gotten back in the ponds. Some people thought that eggs may have been brought in stuck to the feathers of water fowl. I've heard that theory before, but these fish were far too big to have hatched from eggs after the pond had filled with water. I took some photos of the fish to show their size, and talked with a few fisheries biologists about the Sunfish. Everyone reached the same conclusion: someone dumped the fish into the pond. 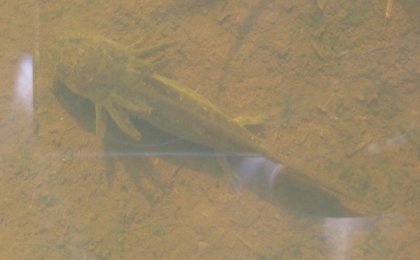 Why would someone dump fish in the pond? They probably thought they were being helpful, or at least, not hurting anything. I was taught about ecosystems in elementary school. Every wetland ecosystem I was taught about included fish. We never discussed the idea that some wetlands not only don't need fish as part of the food chain, but that some animals in the wetlands depend on the lack of fish. We will never know if it was a fisherman with a few too many fish, or a park patron who was just trying to lend a hand, but either way, the fish were back. We had another small drought at the end of summer, and the water level in the pond dropped considerably, but not quite enough to kill the fish. It looked like we were stuck with fish for another year.

The winter of 2013 was cold. Very cold. I was told the frost line in my area usually reached 36 inches below the surface, but this winter, it reached down to 48 inches. We had a long deep freeze that built up a very thick layer of ice on the pond. The pond probably froze all the way down to the mud in some places. In the spots where it didn't, the oxygen levels would have depleted quickly. Once again when there was bad weather, I was the only person happy about it. Every day it was cold, increased the chances that there would be no fish left alive.

I have been watching the pond all spring, and have seen no signs of fish. Not only that, but there are more aquatic bugs in the pond right now than I ever remember seeing in the past. I think the fish are finally gone. Today I was out doing my normal walk around the pond, looking for fish, and not only did I still not see any fish, but I saw larval salamanders. I had not seen salamander larva in open water since 2007, but now they were back. I've only seen a few so far, but I have hope there are plenty more. Time will tell.

A New Hope... Err.. Turtle. Some New Life In Old Cactus There Is Hope! The Lone Survivor? It's Always A Good Time To Go Herping... Even If It's About To Rain! Signs Of Snakes Nailed It! At Least I Had My Cell Phone... Merping With The Orianne Society The Little Agate That Couldn't Tarantulas Are Marching North Smooth Softshells In The Wapsipinicon River Twelve Consecutive Months Of Herping In Iowa A First For Me, But Not A Lifer When The Day Is Gray And Ordinary... Snakes Are Survivors