A First For Me, But Not A Lifer

I have mentioned to people, in person and on Field Herp Forum, that there are days when getting out in the field feels like work. Sometimes I get so caught up in the idea of vouchering animals and jotting down coordinates, that I forget to sit and enjoy nature. It is one of the reasons you don't tend to see me nagging people about whether or not they are entering records into the H.E.R.P. database. When I first joined Field Herp Forum, I would come home from hiking and post pictures of every garter snake I found (and who wouldn't right?). As time went on though, and I learned more about the habits and behaviors of the animals, it became less magical to stumble upon animals. I knew I could go to certain areas and generally find stuff when I wanted. At that time, I got more into collecting data, and putting up maps of my records for the local conservation board, and other people that track herps for the state. People that herped with me had commented to me that I walked out to some of my locations like I was marching in the military. I didn't tend to stop and look at what was around me. As my kid got older, I started taking out some of his friends with us, I started seeing how excited they were to find every little thing. Bugs, flowers, little rodents. It just didn't matter what we found, they were in awe of everything I was able to show them. It reminded me why I started going out into the woods in the first place. I started purposely leaving my camera and GPS at home, and to go hiking again just for the sake of getting out and observing nature.

One of my favorite things to do each spring is to sit down and listen to the frogs call back and forth. When I get the chance, I try to get pictures of the frogs calling. I have pictures of most frogs species from my area calling. Despite seeing thousands of Northern Leopard Frogs each year, and hearing them calling in great numbers in the spring, I had never been able to even watch them call, let alone get a picture of it. Today that changed. When I got out to my favorite area, I heard the abundant sound of chorus frogs that I expected. As I walked near the wetland, I started to hear some leopard frogs calling from one side of the pond. I worked my way over to that end, and looked down at the water. When I looked down towards the water, I could see things moving in the water, but I couldn't quite tell what it was. I worked my way through the thorns that lined this end of the pond, and got near the edge of the water. Everything went silent. I found a somewhat dry spot to plant my rear end, and relaxed along the side of the pond. I looked out and could see the heads of frogs popping out of the water. After a few minutes, the calls started again, and then I realized the movement in the water was the frogs fighting for territory. I was a bit in awe to just watch these frogs do what it is they do while I sat by and observed. I think about how many people get excited to just see a frog hopping on the trails, and how many of those people will never get to see what I was seeing right then. Then my confusion set in.

I was looking right at the frogs, and watching them move around and fight. I could clearly hear them calling right in front of me. I could not see any of them calling though. I spent twenty minutes trying to figure out which ones were calling so I could take some pictures. I was about to give up when one frog swam up to an area just a few feet in front of me. At first he wasn't calling, possibly because all the other frogs were a little further out. I stayed focused on the frogs further out, trying to find the ones with their vocal sacks expanding, but no luck. After another ten minutes or so, I heard a call from right in front of me. The little guy that swam near me was finally calling. The strange thing was, that while looking at him, it still didn't seem like he was calling at all. I could clearly hear that it was that frog, but I could not see his vocal sacs.

I kept watching him through my camera lens so that I had a closer view. When I heard him start calling again, I just started snapping pictures. When I reviewed the pictures, this is what I saw. 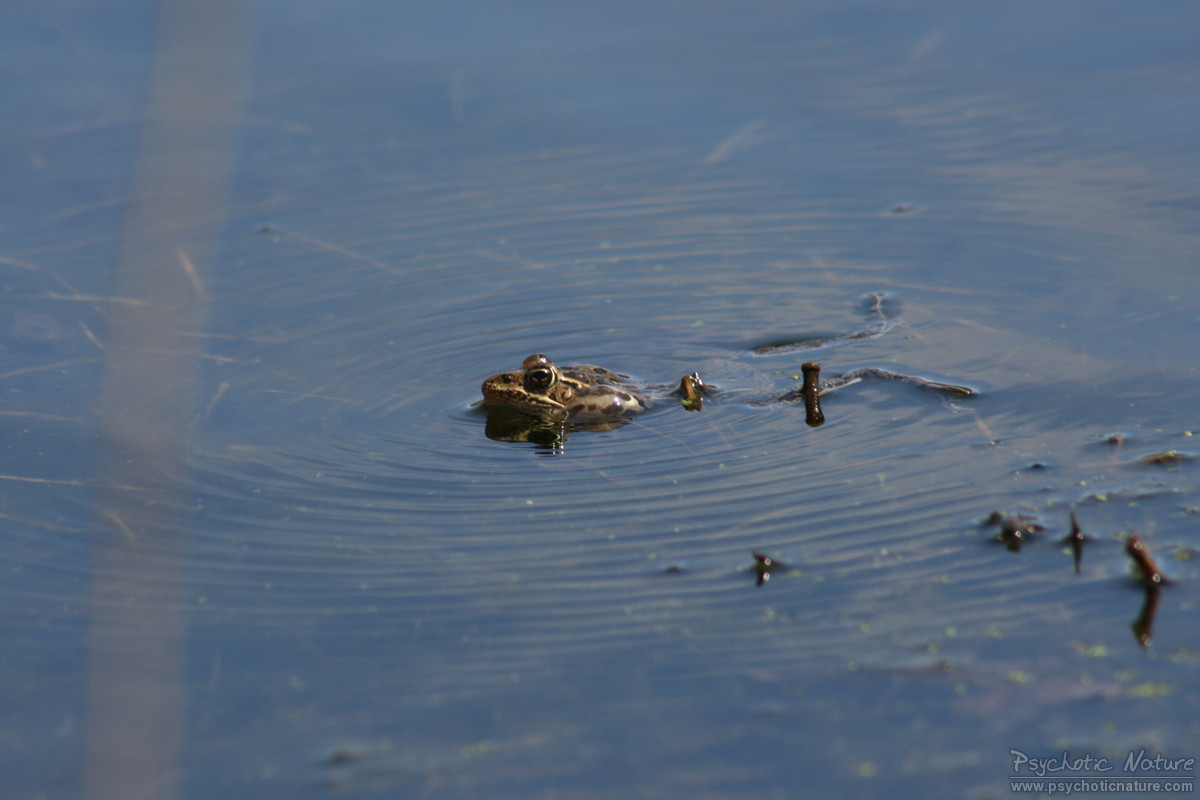 Looking at the picture, I could see the rings in the water showing that the frog was calling, but I still didn't notice the expanded vocal sacs. If any of you have your Peterson Field Guide handy, look at Figure 104 on page 555 (assuming you have the 1997 version). Looking at that picture, I was expecting the vocal sacs to stick up much higher, and from watching other frogs, I expected them to be lighter in color for some reason. It took me a while to realize I clearly had a shot of the frog calling with expanded vocal sacs. I was not done being surprised though.

After a few more minutes of watching the frog near me, he started swimming. While he was swimming slightly under the surface, I still heard a frog calling right in front of me. I scanned the area, but didn't see any other frogs. Then it happened again. The frog was swimming, but I was hearing a call. I thought for sure I would see two frogs fighting right in front of me at any moment, but it never happened. I kept seeing a swimming frog, and hearing calls at the same time. It finally clicked in my head that this frog was calling while swimming around. No other frog species I have watched in the spring ever did this that I could remember. It would always be that they would swim, then pop their heads up to call, then go back under and swim. I got one blurry picture that shows the frog under the surface with expanded sacs. 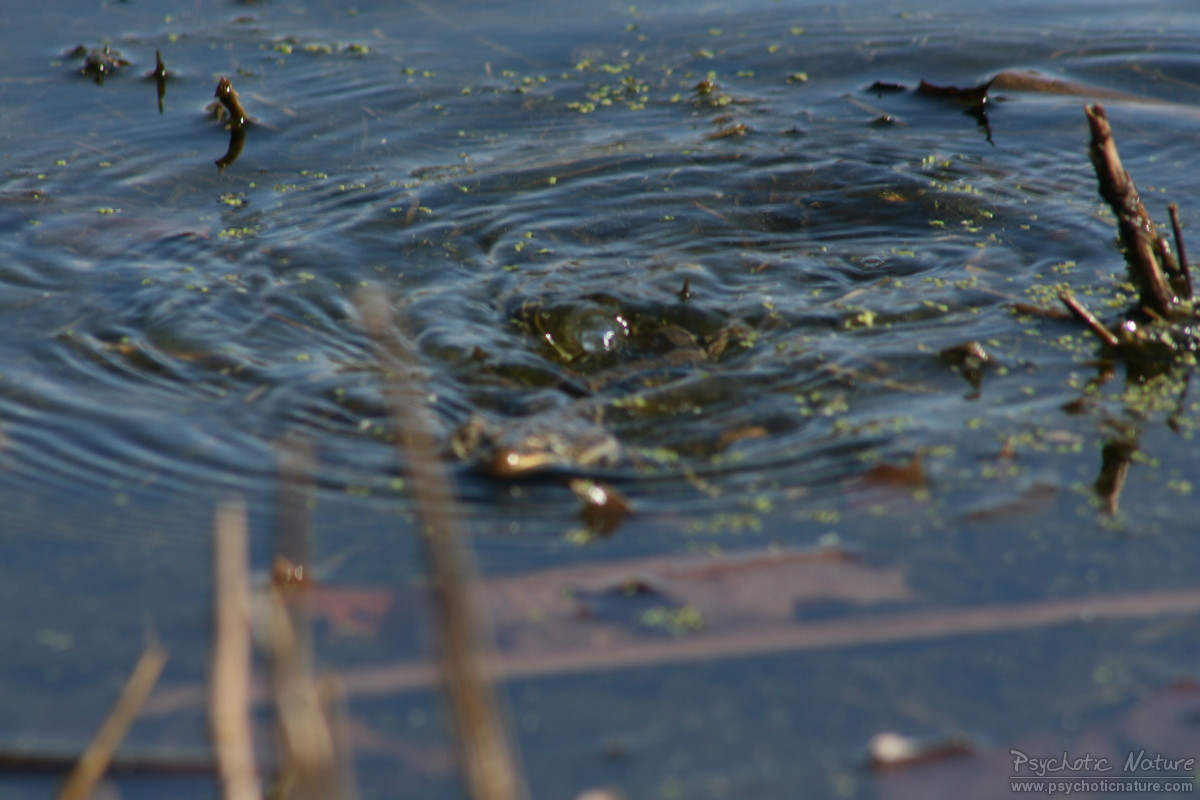 After over an hour of watching leopard frogs, I realized that my actual goal for the day was to hike to an area to see if anything was active at a tin site. Nothing was, but I really didn't care at that point. Seeing something new, even in a common species, topped anything I probably would have found under the tin anyways.

A New Hope... Err.. Turtle. Some New Life In Old Cactus There Is Hope! The Lone Survivor? It's Always A Good Time To Go Herping... Even If It's About To Rain! Signs Of Snakes Nailed It! At Least I Had My Cell Phone... Merping With The Orianne Society The Little Agate That Couldn't The Tiger Salamanders Are Back! Tarantulas Are Marching North Smooth Softshells In The Wapsipinicon River Twelve Consecutive Months Of Herping In Iowa When The Day Is Gray And Ordinary... Snakes Are Survivors